When I was a schoolboy,  we went on the occasional field trip. Museums mostly,  once the Ford car factory,  but my favorite were the geography trips.  Off we would pile into a coach,  excited school kids all along with a couple of teachers to ensure we’d be appropriately instructed and not kill ourselves or worse,  bring shame on the noble institution we were representing.  I think we even had to wear school uniforms.  One trip of note was to Malham Tarn in Yorkshire where we actually learned about glaciers  and what they did to the landscape  (not that there are any glaciers in England we could go play on  but hey,  we we were not at the Alaska Academy here,  we too were victims of geography) and to find fossils in the severely worn down and eroded Pennine mountains.  Another trip was to Arran Island in Scotland.  We were all in the full  flush of adolescence,  there were girls from a school in Paisley on the same trip  (yes there actually is a place,  it’s not just a pattern) and I think we  tried to discover the mysteries of Scotch whisky under the noses of our teachers,  it being logical,  given our location.  Distracted as we were I don’t recall any of the geography we were supposed to learn there.  On reflection though I think I must have learned to love field trips!

The area of Upper  Mustang is the ultimate field trip.  It’s some of the most incredible landscape on planet earth,  centered on the steeply  eroded Kali Gandaki river valley,  whose namesake river and its merging  tributaries  drain the entire  Mustang plateau.  The river runs down from  the edge of the  Tibetan plateau right through the Annapurna range of the Himalayas  and eventually into the Ganges. The Kali Gandaki creates the deepest gorge in the world ( yes,  deeper than the Grand Canyon) as it runs  between two of the world’s highest mountains  of the Annapurna range Dhaulagiri and Annapurna.  What’s amazing is that 60 million years ago this  area was under the Tethys sea and when the  Indian subcontinent slammed into Asia it was   uplifted and the Himalayas formed,  draining that primeval sea away. And the river itself,  predates the Himalayas.  Nature,   always the great equalizer  with water and wind,  immediately started eroding the soft sandstone rocks out of which the hard granite mountains thrust. 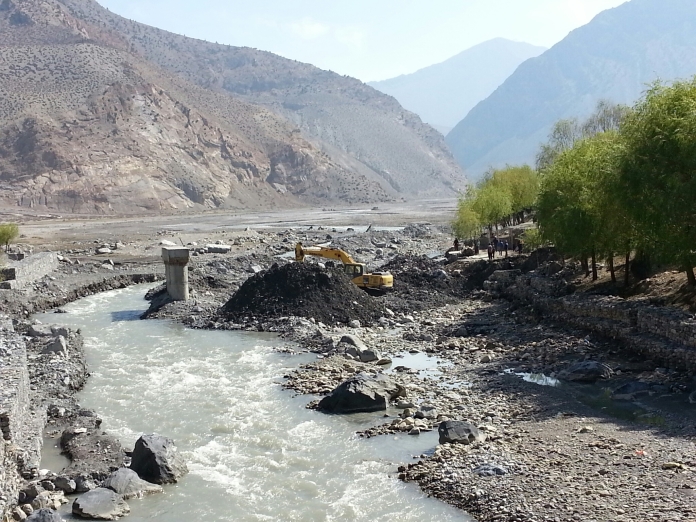 The river narrows at Jomsom,  the start of our trek,  before it widens into a  beautiful floodplain. 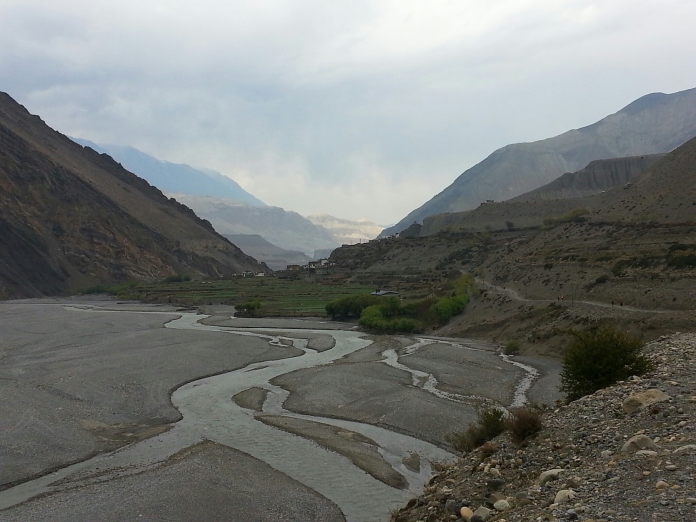 The river meanders throughout its floodplain on the Jomsom to  Kagbeni
trek on the first day.  It looks like a beach,  doesn’t it?

The first night’s stay was in Kagbeni,  framed by apple orchards and   fields of buckwheat

Windy,  cold but nowhere near as cold as it going to get!

Leaving Kagbeni we walked along the edge of the river  as the cliffs deepened into tortured shapes,  blasted by the ever present (and often fierce) winds.  The whole trek was a series of climbs,  up and down these deep gashes in the earth.

Just before our ascent into the cliffside village of Cheli.

I would like to have trekked with a geologist to really help me understand this extraordinary mix of sedimentary and metamorphic rocks.   The sheer range and variety  was astounding.  Here are iron encrusted hillsides shaped by the incessant wind 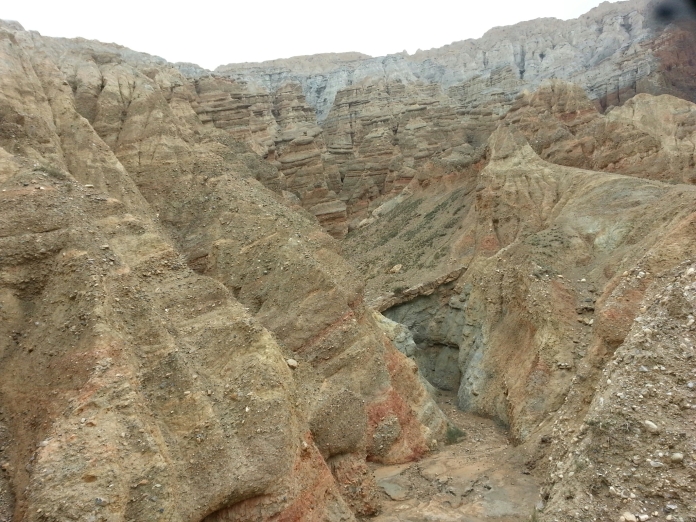 There’s a jeep track carved out of the sandstone and mud.  These gabions  of the loose rocks lying around and buried in the hillsides are laboriously made up by hand – many hands apparently – and lifted into place  to stabilize the edges of the road.  I suspect they won’t last long given the amount of water flowing down the high slopes to eventually find its way into the Kali Gandaki

Crossing one of the interminable and very windy passes we came down the back side,  sheltered slightly and rounding a spur was one of the most amazing sights I think,  on planet   earth; 3 folded mountains like the flag of..believe it or not,  East Friesland (now go look that one up,  geography buffs) in red and blue and black 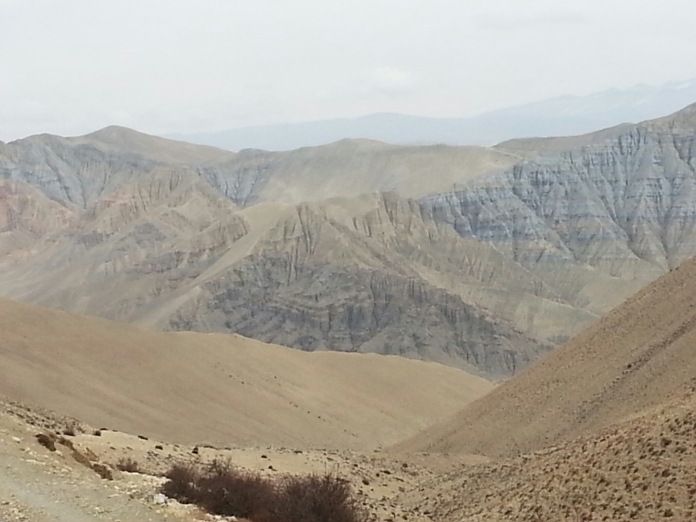 Or this,  where the soft outer sandy rocks are exposing fantastic shapes that take the breath away.

This outcropping  I called the “sphinx and the matroshka doll” 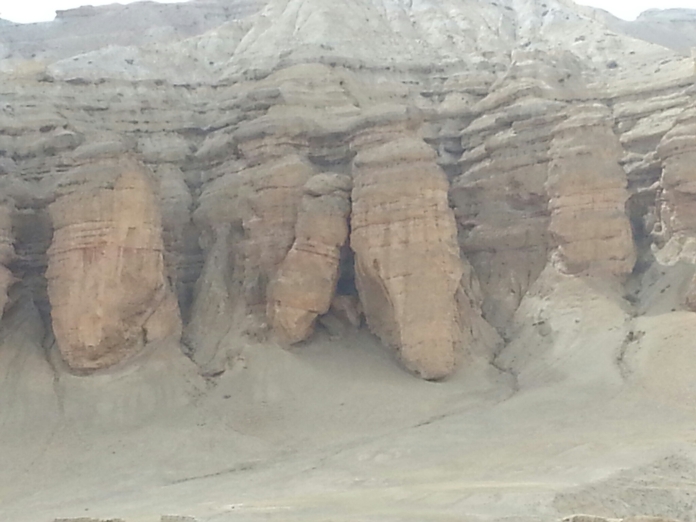 The Leaning Tower of Penis

And in the same vein…

Even Buddhist mythology has its part to play geologically.

These rocks outside Dakhmar are said to be stained with the blood of a devil slain in battle with the good guys of course!

Note the cliffside houses carved out of the soft  sandstone.  Dotting Mustang are these refuges from times past where villagers sheltered from enemies.

I didn’t meet any girls from Paisley on this,  my ultimate field trip,  nor did I have any disapproving teachers looking over my shoulder but I was definitely sampling raksi,  or rice wine, the local equivalent of Scotch,  to warm up in the chilly tea houses each evening.  And to top it off  I found a fossilized ammonite,  a roughly 100 million year old piece of history  washed out of the Kali Gandaki.